Flamenco Festivals in Granada: Top 3 you must join

Granada is one of the most beautiful and majestic cities of Andalusia, full of fun, young people, good food, and alcohol. But it’s known as one of the places which gave birth to flamenco, a dance full of emotions and passion. So flamenco in Granada is a must for everyone. You can experience this art of dancing and music all over the city, especially in Sacramento hills and the caves. But if you are a big fan of it some flamenco festivals in Granada will take your breath away.

Flamenco has been on UNESCO’s Intangible Cultural Heritage List since 2010. Not without reason, as it offers the public a crescendo of powerful emotions that can be summed up as follows: “sorrow, joy, tragedy, peace and sadness” and of course “passionate love”.

The history of Flamenco

The flamenco dance has its origins in the 18th century (possibly earlier). It owes its existence to the gypsies of Andalusia. The gypsies first came to Spain as nomads from India in the 15th century, during a civil war. Because of the oral nature (there is no written evidence) of the flamenco tradition, we do not know whether the birthplace of this dance was Seville, Granada, or Hereth. It is certain, however, that flamenco dance originated in the very poor social strata to express the pains and suffering of the persecuted gypsies.

Originally, there was only the singer (cantaor) and gradually the dancer (ballaor/ballaora) was added. Along with them, some people gave the rhythm either by clapping or tapping their fingers.

As one might imagine, female dancers were treated very differently from male dancers. In Seville, it was mostly poor girls from the Triana area. After the performance, they were usually receiving ‘naughty’ propositions from customers and were treated as villains.

For the male dancers, things were simpler. This inequality, which also represented the Andalusian society in the past, was evident in the dance. Long, sure, firm steps for the male dancers, the sensual swaying of the hips and arms for the female dancers. Today, since the end of Franco’s dictatorship in 1975, things have changed completely.

There are a lot of flamenco performances in the caves of the Sacramonte hill, in the Albaizyn region of Granada. There are caves there – former homes of gypsies in the area – that have now been converted into venues mainly for tourists.

The Gypsies of Granada brought with them a very special kind of flamenco, the zambra. Α primitive, passionate dance, with the dancers dancing barefoot, tapping chestnuts with their fingers. The flamenco nightclubs that draw tourists to Sacromonte hill give an idea of what a zambra is. But they have nothing to do with the locals’ celebrations, which resemble erotic pagan rituals. Someone can only find them in the homes of the Gypsies, in the early hours of the morning, after an all-night drinking, singing, and dancing session. The best zambra feasts are spontaneous at dawn and are very difficult for a stranger to attend.

Maybe the performances are for tourists, but still, they’re totally worth it and they’re considered one of the best experiences that someone can have in Granada and Andalusia in general. 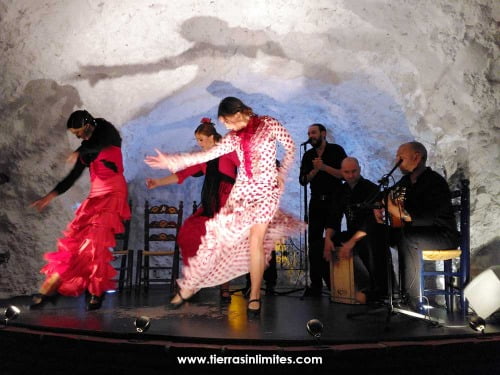 But, except for the performances at the caves of Sacramento, there are every year some Flamenco Festivals in Granada that everyone has to attend.

3 Flamenco Festivals in Granada you must attend 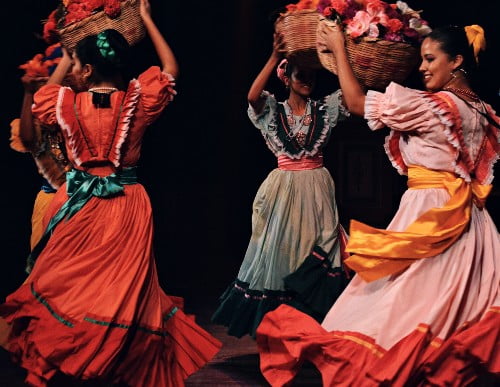 The International Festival of Music and Dance of Granada, it’s one of the oldest and most famous festivals in the whole of Spain. It takes place all over the city of Granada, from streets and squares to the majestic castle of Alhambra, during the months June-July. If you attend the festival, be ready to experience a wide range of audiovisual performances, from classical music, ballet, and opera, to traditional or Spanish music and many flamenco performances.

The International Festival of Music and Dance has had its origin in 1883. It started with the symphonic concerts that were held in the Palace of Carlos V Alhambra, during the Corpus Christi festivities. That gave the city the first opportunity to know and enjoy the great European musical repertoire. But at the same time established its first edition in the summer of 1952. Of special importance in those years was also the celebration of the Concurso de Cante Jondo, organized in 1922 by Federico García Lorca, Manuel de Falla, and other intellectuals and artists of the time.

The Encuentros Flamencos ‘Festival de Otoño de Granada‘ is usually held in Granada during the first week of December. Flamenco artists, musicians, and dancers from Granada and from all over Spain, during a week meet at venues such as the Teatro Isabel la Católica and the Teatro Municipal del Zaidín. Τheir aim is to highlight and present to us unique concerts and flamenco performances. The nightly performances called “trasnoches” are less formal flamenco shows that take place in nightclubs all around the city of Granada.

The ‘Lucero del Alba’ it’s one of the most important flamenco festivals in Andalucía. It takes place every summer, usually in August, in Salobreña an area of the city of Granada. It comes from the end of the 60s and is always characterized by top artists. It’s considered to be one of the most desired summer festivals for tourists and locals.

There are also some more festivals near the city of Granada, like the ‘Flamenco festival of Ogíjares’. It takes place every September and ‘Volaera Flamenca’ every August in Loja.

You can find more information about Flamenco in Granada and the Flamenco festivals here.

If you are an Erasmus student in Granada and looking for some tips and what to do, check here.

Christmas in Malaga: Top 6 things to do

What to do in Malaga on a Sunday: Top 6

Malaga Nightlife: The Ultimate Guide to Party in Town

The Best Bars and Clubs in Granada: Top 8

Vacations in Granada: Sea and mountain experience / 2 in 1